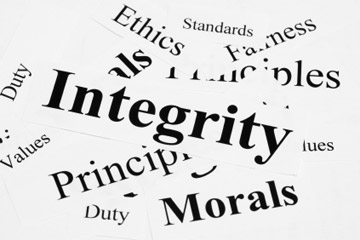 When Time magazine editors named WorldCom’s Cynthia Cooper and Enron’s Sherron Watkins two of their People of the Year for 2002, they were acknowledging the importance of internal whistleblowers—employees who bring wrongdoing at their own organizations to the attention of superiors.
At WorldCom, Cooper pushed forward with an internal audit, alerting the Board of Directors Auditing Committee to problems, despite being asked by the company’s CFO to postpone her investigation. According to Fortune magazine, “If Cooper had been a good soldier, the whole incredible mess might have been concealed forever.” At Enron, accountant Sherron Watkins outlined the company’s problems in a memo to then CEO, Kenneth Lay.
But by the time Watkins and Cooper blew the whistle, much damage had already been done, and the shareholders and employees were the ultimate losers. So the question is, How does an organization create a culture that encourages employees to ask questions early—to point out issues and show courage in confronting unethical or illegal practices? And then how can a company ensure that timely action is taken? In other words, how does an organization encourage internal whistleblowing?
These questions must be answered in the context of conflicting cultural norms, which used to make it likely that whistleblowers would encounter hostility and alienation. Many people used to see the whistleblower as a “snitch,” or a “lowlife” who betrays a sacred trust largely for personal gain. The rapidly evolving approach to whistleblowers is one that views them as guardians of accountability whose actions add tangible value and limit liabilities within an organization.
With the enactment of the Sarbanes-Oxley Corporate Reform Act of 2002, internal and external whistleblower protection has been extended to all employees in publicly traded companies. The provisions of Sarbanes-Oxley;

The passage of this act has created an environment in which many organizations have realized the importance of instituting ethics policies and codes of conduct to address issues related to unethical or illegal conduct. The business climate in the wake of Enron and WorldCom, coupled with Sarbanes-Oxley, is one in which employees can feel more empowered to report ethical or legal violations.
So, the question is, How do organizations encourage internal whistleblowing—that is, to an authority within the organization—to preclude external whistleblowing and the resulting damage to an organization? Some best practices for encouraging employees to bring unethical or illegal practices to the forefront and addressing them before they become fatal to an organization include;

Some barriers to a successful internal whistleblowing program are