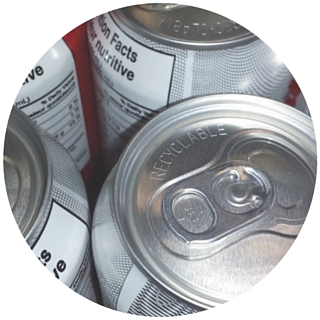 Fraud: beverage can return scam is uncovered in Alberta

Today’s ‘palm to the forehead’, yet somewhat cleverly fraudulent activity in this post, uncovers a beverage return fraud scam that was brought to light by an eagle-eyed Alberta immigration officer.
Personally I’ve never seen the Seinfeld episode that will be referenced, where they participate in a return-it fraud scheme. Nor have I really thought too much of this actually happening – living in BC we can return, for our deposit back, almost every single beverage container we purchase, from pop, beer, water, to juice.
In fact it’s a popular fundraising event for my son’s high school. The neighbourhood leaves their empties out by the curb and students and volunteers pick them up and truck these money-making items off to the local Return-it depot.
In 2013, the above mentioned eagle-eyed immigration officer was strolling around the grounds of a depot location owned by Alberta Reclaim and Recycling. He saw plenty of of crushed bales of cans lying around. But what struck him was one employee was taking cans out of the bales and putting them into garbage bags. Usually it’s the other way around.
His suspicion blew open the most lucrative returnables scam in Canadian history.
According to an investigation that followed, the return-it firm would head to the Yukon Territory and buy thousands of pounds of bales of crushed cans with the promise they would themselves be used to make other types of materials through melting and recycling.
Instead the company took the bales to their bottle depot and had workers clandestinely break apart the bales, recover the cans, and cash them in for 10 cents a piece.
Where’s the fraud in this? There’s no recycling in the Yukon. So when cans from one province are brought into another, this scheme essentially rips off the unsuspecting province. Money is being handed back to the ‘consumer’ to return the ‘deposit’ for items that were not purchased originally in that province.
The Seinfeld scam? In a 1996 episode, Kramer and Newman learn that Michigan pays out 10 cents per can, compared to New York’s 5 cents. Their scheme consisted of them hauling a truck load of cans into Michigan for return. Essentially doubling their efforts, making a tidy profit.
Here in Canada, there are provinces that don’t have return programs for deposit back (they really should – the deposit is the incentive to return vs. throw into the garbage).
For example Manitoba. It does not charge any deposit on it’s drinking containers. So it’s absolutely possible that any person in Manitoba can load up their cans in a vehicle, and drive them into Saskatchewan, and make a nice profit. And you can bet it’s being done.
And what about all those Canadians that purchase their booze in the states? It’s cheaper there, and we are allowed to bring a certain amount back into Canada if our stay in the US was 24 hours or more. You can bet that many of those Corona bottles are being taken to local Return-it depots for a return of deposit that was originally spent in a US store.
However, they are pretty on-the-ball at my particular location. Completely unintentionally (I swear) a few times the odd US purchased bottle has ended up in the ‘return for cash’ Rubbermaid bin, instead of the ‘curb side pick-up’ recycling bin.
So how much exactly did this Alberta bottle scam end up costing Albertans? Alberta Reclaim and Recycling is accused of ripping off the province of more than $750,000 by cashing in more than 8 million cans smuggled in from out of province.
Compared to other frauds that make the headlines, the number involved does not have that wow factor that the multi million dollar frauds have. However, put it into perspective. Eight million cans were smuggled in and never noticed. This is astounding!
In 2011, Alberta Reclaim and Recycle depot was suddenly processing 1000% more returnables. In 2010 the people in this town were drinking roughly 1550 returnables per day. The next year, with no change in their thirst, they were supposedly drinking that many bevvies cans every two hours.
This fraud was bound to be noticed at some point. There are serious red flags in this scheme. The most obvious being, if out of province / state vehicles suddenly show up at a return depot with bags of cans, chances are they were not purchased in that province or state.
Download a fraud toolkit. It can help any company.