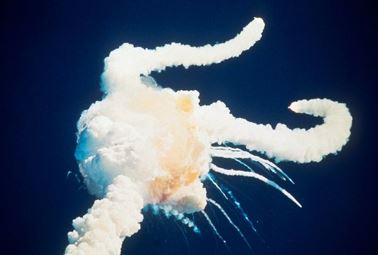 Some institutions tend to avoid focusing on difficult problems until they literally explode in disaster. And on January 28, 1986, an explosion really did happen, killing 7 astronauts.

The knowledge of a poorly performing O-ring at low temperatures, and the lack of action to fix it, lead to the Space Shuttle Challenger disaster. At 68 seconds, the Space Shuttle Challenger was given its commands from Mission Control. Commander Dick Scobee issued the Shuttle’s last response: “Roger, go at throttle up.” Four seconds later, pilot, Michael Smith, said “Uh oh.” A second after that, a spontaneous inferno of fuel in the booster exploded the external tank. Fifteen kilometres above the Atlantic Ocean, the Shuttle violently broke apart.

Widespread lack of reading risks properly lives in almost every institution, but it becomes very clear in those whose decisions can kill people. In her report on an internal investigation earlier this month, GM’s CEO Mary Barra described a company where individuals failed to act on information that pointed to danger. The company knew about safety issues with the ignition switch in their cars as early as 2010, but no action was taken.

An Issue of Convenience Rather Than Safety

As with the O-rings at NASA, the problem of cars stalling when moving at high speed was filed away over the years and deemed an “acceptable risk,” a convenience issue rather than a safety issue. The problem was shuffled away amongst the company’s various silos. Like NASA, GM felt safety was a critical organization issue, but these types of important issues compete with others like controlling costs, and staff reductions (seemingly widespread these days), which tend to be central in an organizations whole culture. This can result in an organizational-wide culture of discouraging speaking up, stepping up, and admitting fault.

The US Department of Veterans Affairs is another recent example we’ve seen lately. There’s mounting evidence suggesting that some doctors and employees were terminated for complaining about disorganization, persistent delays, and attempts to conceal both at hospitals around the US. The result has seen many patient deaths along the way.

A Culture of Silence and Intimidation

When a problem is ignored long enough, it can go from being an acceptable risk to a disaster in an instant. The problem is if someone sounds an alarm, that person is going up against organizational inactivity, chains of command, and cultures that acquire some of their strength from a sense of “yes sir, no sir”.

Organizations need to know the difference between issues that need to be addressed promptly, and issues can be accepted and put aside. Organizations operate on a deadline basis: the Shuttle had to be launched on time to make NASA look good; GM cars were rolling off the assembly line into waiting customer’s hands. Organizations become desensitized to problems because they haven’t proved serious yet, and there’s no easy solution to fix them.

But potential whistleblowers who are willing to speak up and shed light on potentially dangerous issues, are often shunned. There were whistleblowers at GM who did speak up, but were ignored. And engineers at NASA were concerned about the O-ring in low temperatures but were ignored. Even when organizations know about risks, some will go out of their way to hide them and fight the people who expose them.

We strive to help organizations build a culture of integrity, transparency, and accountability. An organization’s culture is different in all industries: we believe there’s no one-size-fits-all solution for building an adopting a strong organizational culture. But we do strive to provide all organizations with a solution that can be customized to fit the varying needs of different organizations, while helping to build and strengthen internal cultures. One step in building a successful culture is with the integration of a strong compliance program, including a whistleblower hotline. This is a powerful tool for any organization to implement in their proactive measures to ensure their business success and grow their strong culture where employees can thrive.

WhistleBlower Security prides itself as a global independent certified ethics reporting provider for businesses, and is committed to promoting a culture of integrity, collaboration and transparency for all our employees and clients. With a 24/7/365 whistleblower hotline, employees can be assured that all of their ethical concerns will be heard and addressed.