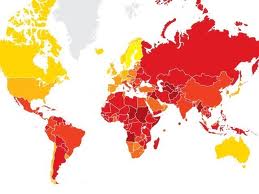 Transparency International has recently released the 2013 Global Corruption Barometer, a report which outlines the results of a survey which polled 14,000 people in 107 countries in order to gauge the extent to which corruption impacts the everyday lives of citizens.  The results of the poll are troubling, and highlight the need to implement best practices in order to curb this issue.  The survey focuses on the following key points in outlining the extent of corruption globally:

Perceptions of corruption are worsening worldwide

Bribery the most widespread form of corruption

27% of citizens polled confirmed that they had paid a bribe in the last 12 months, and this number has not decreased since the last Global Corruption Barometer survey.  Furthermore, the institutions seen to be the most bribery-prone are those entrusted to protect citizens, with political parties, police, and public officials topping the list.

There is declining faith in governments’ ability to effectively combat corruption

54% of people do not believe that their government is doing enough to curb the problem and hold the corrupt accountable.  This number has grown from 47% in the last two years.  In as many as 88 of the surveyed countries, the majority of citizens considered their governments ineffective, and 16 of the 17 G20 countries (who have repeatedly made it clear that they were committed to taking steps against corruption) included in the poll fall into this category.  This loss of faith appears to be due in part to a rising belief that government is heavily influenced by special interests.  In Canada, the majority of respondents believed this to be the case.

Transparency International’s recommendations with regards to dealing with these issues stress the fact that not only is democratic reform necessary, but also that individual empowerment must be considered as a key factor in anti-corruption movements.  Globally, two out of three people surveyed by the Transparency International believe that ordinary citizens can make a difference when it comes to combating corruption.  However, this percentage has dropped since the 2010/2011 Global Corruption Barometer, as has the percentage of people who say they would be willing to report an incident of corruption.  The main reasons for these declines are the above-mentioned lack of confidence in governments’ ability to deal with reports in an effective manner, and fear of reprisals.  Based on these findings, the Global Corruption Barometer highlights the importance of cleaning up democratic processes, and of providing the necessary tools and protections to individuals through the implementation of appropriate whistleblower laws and follow-up mechanisms.  Furthermore, the report suggests that a primary concern should be an effort to increase public engagement against corruption.  In most of the populations surveyed, the majority of people showed a willingness to become more engaged, and the report suggests that those in positions of influence should acknowledge this willingness and put the correct channels in place to allow the public to more effectively and safely report instances of corruption.

What is clear in Transparency International’s findings is the important role whistleblowers can play in combating corruption globally.  The desire of individuals to act against corruption and the declining confidence in governments’ ability to take appropriate action suggest that there is work to do in bridging the gap between the those in positions of power and the public.  There is a growing demand for increased agency for individual citizens in the fight against corruption, and it is therefore necessary to implement improved processes for reporting and whistleblower protection.  Legal reform is of the utmost importance when it comes to anti-corruption movements, but it must include legislation to protect whistleblowers and provide effective follow-up mechanisms in order to increase transparency and harness the ability of individual citizens to curb corrupt practices.