Organizations with hotlines are much more likely to catch fraud by a tip – it’s the most effective way to detect and deter fraud. It’s also the most effective way to decrease the median duration of fraud cases. Without any way for employees to speak-up about what they know, wrongdoing is going to continue. With no reporting mechanism in place, fraud can go on for as long as 18 months before it’s ‘stumbled’ upon. But with a reporting mechanism in place, that time can be cut drastically, saving precious time and money.

But getting employees to speak up when they see signs of wrongdoing is hard. Many employees struggle with initially “taking the plunge” (because that’s how it may feel) for a very long time before finally settling on a decision to just go for it. Why? Because, as much as we work hard to move away from the term “snitch”, that may very well be what employees feel like. They’ve seen their coffee buddy participate in some sort of wrongdoing, so they struggle with that big question – “do I throw my coffee buddy under the bus, or do I do the right thing and report them?” 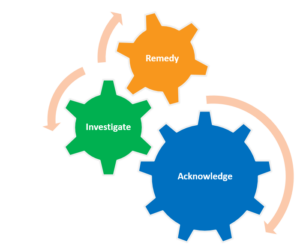 It’s a legitimate feeling. But let’s get something straight here. Snitching and whistleblowing are two completely separate things.

A snitch is your sibling, or another child, who feels it’s “in their best interest” to tattle on you when they feel you do something wrong – taking more than one cookie out of the jar.

A whistleblower is that ethically strong person who feels it’s “in the organization’s best interest” to bring to light a perceived wrong that could end up costing the business piles of money, starting a roller coaster ‘legal’ ride, and having senior level folks end their careers.

Big difference! Here’s how you create a speak-up culture, and manage your ethics reporting incidents.

It’s the first step really and it’s easy. All it takes is acknowledging that you’ve received notice of the incident. That doesn’t mean walking up to face the whistleblower in person and say “hey so-an-so, I just got your complaint and I’m going to look into it”. It means having a program in place where communication can take place between an assigned reviewer and the whistleblower, continuously, while the whistleblower remains anonymous. It means initially acknowledging that the report has been received and the investigation process has started. When acknowledgment happens quickly, the organization is showing an interest in what that whistleblower is feeling and experiencing that made them come forward in the first place. Chances are, there’s something serious brewing and you’ll want to know about it.

Now that you’ve had notice of a potential wrongdoing. It’s time to get in there and find out exactly what’s going on. All it takes is that one reported incident that could halt a potential nightmare in its tracks. Home Depot was slow to act on risks that were brought to light. It ended up costing them millions of stolen customer data. But here’s a tip, go one step further in your investigation. Don’t just investigate the issue. Dig deeper and understand why that wrongdoing is actually able to happen. Don’t just treat the symptoms. Get to the root of the issue to prevent it from happening again. Use a third-party ethics reporting program to keep anonymous communication with the whistleblower ongoing in order to get more information if and when needed.

If something is ‘broke’, fix it. Isn’t it in an organizations best interest to find the source of the issue? An organization should want to ensure that if there’s cracks in the foundation, those cracks need to be fixed to avoid potential fines, violations, legal time, and bad press. How did that misconduct happen in the first place and could something have been done to prevent it? Are you able to take what was learned and apply these result into changes to policy and other improvements in internal controls? By addressing and adjusting possible wrongs when they come to light, not only are you avoiding regulators chasing you down, you’re creating a culture where employees want to excel, and help the organization along its path of business success.

Implementing a succinct third-party ethics reporting system that allows stakeholders to anonymously and safely report instances of wrongdoing, is a first buffer against fraud, waste, and abuse.