A Look Back at Fraud in the Workplace 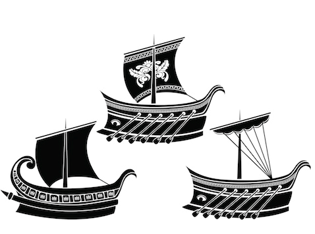 It’s probably safe to say that fraud has been around since the beginning of mankind.
It probably took our earliest hunter/gatherer ancestors not long to realize that if someone else had food that could be traded for a weapon, the food could be had for a subpar weapon, created hastily from subpar materials that couldn’t dent a pile of dirt, let alone the food animal available. Meanwhile, fraudster weapon maker has bolted with an easily had week’s supply of meat to feed his family, and the other guy has lost his meat supply, and is the proud owner of a useless weapon.
This is speculation, although, most certainly scams did happen back then to some degree. But in keeping with Fraud Prevention Month, we wanted to write about the first known instance of fraud. It’s a story from about 300 B.C. featuring two Greek characters named Hegestratos and Xenothemis.
The Greeks used to practice bottomry, a form of maritime insurance. Ship captains would often need to repair their ships in a foreign port, but had no money to do so. The captains would borrow money from a moneylender using their ships as collateral, then repair the ships. They would then sail their ships with cargo to their destinations, sell the cargo for a profit, then pay back the moneylenders, including interest. In essence, this was when insurance was born, and – wait for it – in the blink of an eye, the insurance scam followed.
Ship owners would claim their ships had sunk, when in fact they were hidden in some secret location (of course, minus any assumed cargo). If the boat was indeed uncovered still floating and undamaged, the owner would have to pay the insurer twice the premium. And there you have modern day fraudsters in the making.
Back to Hegestratos and Xenothemis, two shipping geniuses who decided to initiate a bottomry scam. They contracted with an insurer for a ship load of corn and said they would sail to Athens. Instead the ship left with an empty cargo hold. The two men planned to sink the boat, then paddle back to shore on a raft, and pocket the value of their ship plus the non-existent corn. However, plans backfired when their crew wondered what all the hammering and banging was down on lower decks and were understandably a little upset that the two were planning on drowning everyone onboard…were these crew the first known whistleblowers?
Too bad the crew of this near doomed ship didn’t have a whistleblower hotline in place to report the questionable actions of the two men in charge. Luckily modern day ethical practices put such a bottomry scam to shame. However, variations of this insurance scam still happen today, and fortunately, for risk averse organizations, whistleblower programs are available for the purpose of proactive reporting and remediation of wrongdoing.
Whether it’s for regulatory compliance, financial transparency, corporate governance, employee, client, investor or patient relations, or ensuring your shipping line complies with maritime laws, becoming WhistleBlower Secured™ will enhance your corporate integrity and empower employees to contribute to an ethical workplace.