Prison Healthcare Whistleblower Tells It Like She Sees It 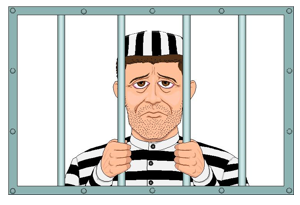 This brave whistleblower was a patient care technician for Corizon Health, the largest private prison healthcare provider in the US. She has numerous accounts of poor and inadequate healthcare provided to prisoners.
Many states in the US have privatized their prison healthcare system. Arizona being one of them. “America Tonight” did a six month investigation into the prison healthcare system and found evidence that the first private company that Arizona contracted, Wexford Health Sources, provided inadequate treatment and were violating prisoner’s constitutional rights.
One such prisoner found she was pregnant just days before being sentenced to two and a half years behind bars for drug possession. She gave birth to her daughter while in prison, and the experience nearly killed them both. She was not given an ultrasound when her doctor requested one, and after a difficult labour, a caesarean section was performed, whereupon going back to her cell, the incision re-opened. Guards refused to let her see a doctor and she endured a gaping wound for two weeks before finally being treated with a vacuum and, in her words, “they poured sugar into the wound…like McDonald’s sugar” then gauzed it up.
But Back to Our Whistleblower

She lost her job in late March for refusing to go to work while suffering from a case of scabies she caught from a prisoner. She thought it would be unethical to treat patients while she was still contagious. She’d already infected a family member. According to her, Corizon and Arizona prison officials have been trying to cover up the outbreak, which now includes the original prisoner and seven staff members.
But that’s not all. The most persistent problem – staffing. Many “dementia patients take time in feeding, and because of the short staff we’d have to stand there for hours to try to feed them and it was just not permitted.”
Sometimes patients would go unfed. Others who were incontinent would sit for hours in their own feces. And still others died.
One dementia patient had a “vascular catheter in his arm for dialysis treatments. He didn’t understand what it was and kept playing with it.” The whistleblower “repeatedly told senior staff he needed additional supervision. Instead, they sent him back to his cell, alone. At 5 a.m., she went in to check on him. He was not alive and there was blood all over the room as the patient had unplugged the catheter and quickly bled out.”
The whistleblower states that “if Corizon had employed more staff to monitor patients, he might still be alive.”
There are some numbers to back up the whistleblower’s claims. Since the state privatized its prison healthcare, medical spending in prisons dropped by $30 million and staffing levels plummeted. And according to another report, there was sharp spike in the number of inmate deaths. The first eight months of 2013 saw 50 people die in the custody of the Arizona Department of Corrections. This compared with 37 deaths in the previous two years combined.
Does a Two-Year Prison Sentence Essentially Equal a Death Sentence?
A 2012 lawsuit filed by the American Civil Liberties Union, states the health care in Arizona’s prisons now amounts to cruel and unusual punishment, with prisoners at serious risk of “pain, amputation, disfigurement and death. People are often sent to prison for two-year, three-year sentences that have turned into death sentences because of the absence of the basic minimal care.” Case in point, another inmate was prescribed Morphine for esophageal cancer, but when his prison ran out of the drug, he was given a weaker painkiller. He died in the care of Arizona’s privatized prison healthcare.
And of course there’s the other side of the story – legislators who supported the privatization of prison healthcare promised that it would save taxpayers money, while maintaining adequate levels of care for inmates. The majority of states have privatized prison healthcare, rewarding private companies for keeping costs down.
But Allegations Of Wrongdoing Continue to Mount
According to another report, an inmate at the Whetstone Unit of the Arizona State Prison Complex tested positive for tuberculosis in August. But Corizon did not test other prisoners, even those who were doing community service outside the complex.

You know what you need to do to avoid negative publicity: implement an ethics reporting system.

Well we can thank another brave whistleblower for coming forward and reporting the wrongdoing she saw in her place of employment. And that’s the whole point. How else are we to know about what goes on out there unless a whistleblower comes forward and reports it. And how else will the alleged wrongdoings get rectified if they don’t come to light? The key to a successful organization is trust in its employees and its Code of Ethics.
Whistleblower Security is committed to promoting a culture of integrity, collaboration and transparency for all our employees and clients. With a 24/7/365 whistleblower hotline, employees can be assured that all of their ethical concerns will be heard and addressed.