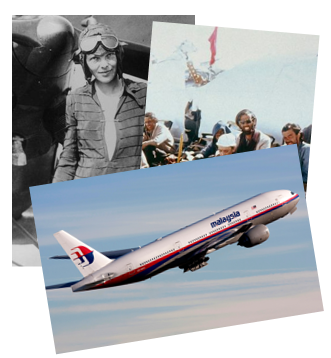 July 2, 1937 – Amelia Earhart disappears while circumnavigating the globe. Theories about her disappearance have fascinated researchers on all corners of the globe, and there are many theories about her demise.
October 13, 1972 – Uruguayan Air Force Flight 571, carrying a rugby team, crashes in the Andes Mountains in South America. Sixteen passengers survived more than two months in the frigid conditions. The event was immortalized in 1993 in the film “Alive”.
March 8, 2014 – Malaysian Flight 370 went missing as it flew from Kuala Lumpur to Beijing. Researchers are still working on this tragedy, trying to figure out what exactly happened.

In what can only be described as searching for a speck of dust in haystack, a submersible robot carried out an extensive search in the Indian Ocean, trying to locate acoustic signals from the vast ocean floor but could not located the flight recorders.

The mystery of this flight is still alive, as there is no explanation to the disappearance of this plane that carried 239 people. Officials say they are reviewing search data, but fail to find any trace of the plane. The sea floor continues to be searched with specialist equipment. What is known is that the airliner ended its journey in the Indian Ocean, north-west of the Australian city of Perth.

So now, a fund-raising drive (Project “Reward MH370”) has been launched by relatives of some of the passengers, who were on the missing Malaysian plane, to seek much needed information. This campaign, spearheaded by an Australian businessman – who lives in Hong Kong with no connection to any of the missing plane passengers – is trying to raise at least USD $5M “to encourage a whistleblower to come forward”.

The project head said “somewhere, somebody knows the answers to what happened to the flight and possibly where the flight is,” and he added “that it could be someone linked to secret services or someone linked to terrorist networks.”
This “whistleblower” campaign is being lead by five of the relatives. As governments and agencies have done their best in the search, but failed to turn up a single shred of any evidence to prove any theory, this new initiative, with a hefty reward on the table, could help to bring in some much needed tips to help move the investigation along.
This is a brilliant display of creativity to help in the investigation of this tragedy. Having a place where someone, anyone, can step forward and anonymously report on anything they saw, (or know), regarding this airline mystery – and not to mention the potential for a hefty reward – surely has got to bring in some much needed information.
Studies have shown that there is an increase in whistleblower hotline tips. Globally, more and more people are feeling safer coming forward to report wrongdoing if they feel they can do it safely and anonymously. Let’s hope that this new initiative will bring in some helpful information.
Having an independent certified ethics reporting system such as Whistleblower Security on your side, is a very powerful tool that can be used to anonymously report wrongdoing. And the whistleblower certified ethics reporting program is a very small investment to organizations and delivers very powerful results that will enable business success.
Whistleblower Security is committed to promoting a culture of integrity, collaboration and transparency for all our employees and clients. With a 24/7/365 whistleblower hotline, employees can be assured that all of their ethical concerns will be heard and addressed.