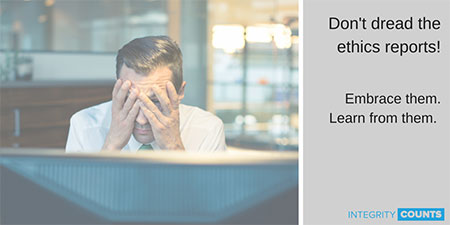 In a recent Compliance & Ethics Blog post, called So You’ve Received an Anonymous Complaint, Why You Shouldn’t Just Ignore it, the author talks about how many compliance officers may be faced with anonymous complaints, so maybe they should just ignore them. After all, they’re anonymous – who’s going to know if they’re followed up on or not?

There’s the argument that companies who don’t allow the submission of anonymous complaints will reduce the number of frivolous or bogus complaints. Then there’s others who say that allowing anonymous complaints to be filed provides employees with an avenue to report misconduct without fear of retaliation. Both valid points.

For bigger companies with compliance officers, who have limited time and resources, perhaps they put investigating anonymous ethical matters on the back burner, only to be forgotten. The problem with this is that employees who have something to say, will say it – to the media, to a government agency. And if it’s found out that there was a complaint and the compliance officer did nothing about it, there will be some explaining to do.

For smaller companies, saving investigating anonymous ethical concerns for ‘another day’ could prove quite disastrous. Those who participate in unethical decision making will continue until caught.

So we say: rock those reports! Embrace them. Investigate them. Learn from them. Don’t ignore them!

Some might argue if they are ignored, the issue will go away (it won’t). The longer someone is able to practice a bad behaviour, the harder it is to stop.

Others will argue that perhaps anonymous reports tend to be bogus and brought up by disgruntled employees looking to get a rise out of management (it’s possible), but more than likely not true… and if it were true, then ask yourself why are they disgruntled in the first place and is there a bigger issue you’re not aware of.

For the bigger organization, compliance officers and Sr. management also need to be aware that any anonymous complaint could also have been submitted to other investigatory agencies, like the DOJ, state inspector general, a local prosecutor’s office, even the media. If one of these third-parties investigates the complaint and discovers wrongdoing, they will also discover that the person who was supposed to be looking into these matters also received the complaint, but took no action. Then the gong show ensues – you find yourself responding to questions about other anonymous complaints you may have received but took no action on. Or better yet, you become the subject of a newly launched investigation, the results of which will likely not be anonymous.

In both these scenarios, any fallout could easily have been prevented if only you responded to an anonymous report and did your best to investigate it. You never know what you may find, or learn, about the inner-working of the company. Take this opportunity to truly gain a thorough understanding and appreciation of the company and employees. Don’t ignore what they have to say, directly to you, or anonymously through a reporting system. Think about this:

More fraud is discovered by an anonymous tip – More fraud is detected by tips than by all other means combined. A hotline is simple, provides an immediate means of communication and offers support and encouragement to employees.

One third of business failures are due to internal theft and fraud – Many smaller firms do not have the means or sophistication to implement strong internal controls, so the extent of their losses can be devastating for that business. This alone makes it even more imperative for smaller operators to have a hotline set up to ensure they can gain access to information earlier to mitigate any potential losses.

A large number of private companies have reported experiencing fraud – Public companies may be mandated to have a whistleblower system in place, and more and more non-profits are implementing these systems as a way to protect their reputation and mitigate risk. But private companies who believe they don’t need these systems are setting themselves up for potential disaster. Most fraud is conducted by long-term employees who have access to accounting, operations, sales or manufacturing departments.  Private companies need to ensure they put internal controls in place.

Fraud can continue for up to 18 months before detection – It can be devastating and at times non-recoverable for many businesses. The more internal controls are in place, the more quickly fraud will be discovered. Employee training, management’s commitment to a whistleblower policy, and anti-retaliation practices are key to ensuring staff feel confident about coming forward.

Small businesses are very vulnerable to fraud – Because small businesses are usually focused on the day-to-day operations, strategic planning can often fall off to another day. While implementing vast internal controls is best, instituting small measures to begin with is a good place to start. Setting up a hotline is easy, cost-effective and an instant way to gain access to information that could save your business.

Over half of victim organizations never recover their losses – Most victim organization discover their losses long after they have been spent. Studies show that the majority of business fraud does not go into investment properties or other such recoverable items, rather the perpetrators used it to support lavish lifestyle enhancements and spending, gambling or other addictions. In a nutshell – you’re not getting your money back.

These statistics were taken from the ACFE’s Report to the Nations.

Our message to you – don’t ignore whistleblower reports.