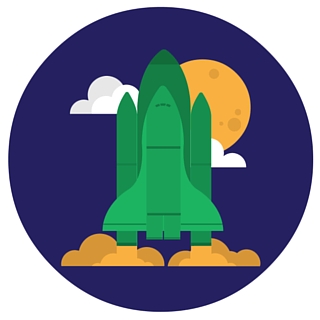 January 28, 1986 will be forever etched in our minds. Grade 8, sitting in the high school library with a crowd of other students. Our eyes were glued to the portable TV that was wheeled into the library from another classroom. At that moment, lessons stopped for many of us as we were made to watch this space mission. We students didn’t really care much about this space mission. We were thrilled at having free time in the library away from math, science, or whatever. It was the teachers who were enamored with this event. One of their own, Christa McAuliffe, was sitting strapped inside the crew compartment. This was their biggest event ever!

What suddenly stopped the incessant chatter, flirting, yawning, and other typical teenage activities was that image that appeared on the screen. We were all stunned into silence.

What intrigues me now today, is that it could have been prevented.

You probably do have to be a rocket scientist to get this so I’ll explain this as I understand it.

At 58 seconds into the flight, Challenger entered what is called Max-Q. This is where the aerodynamic pressures on the shuttle were at their maximum. The shuttle made it through this point – yay for modern man-made materials that can withstand anything!

At 73 seconds in, Challenger broke apart over the Atlantic Ocean. This started with the failure of an O-ring seal in the right Solid Rocket Booster that let hot gases break through. Due to the cold weather, the O-ring didn’t seal tight and let these gasses escape: an O-ring is used to seal connections in pipes and tubes. The hot gasses that escaped acted as a blowtorch and pierced a hole in the wall of an external tank. The dome of liquid hydrogen failed and smashed into the liquid oxygen tank, and science took over – a release of fuel that burst into flames.

Like in a passenger plane, if there’s crack or break in the body, that spells disaster – the materials will rip apart under the immense pressure it’s under. The Orbiter was torn apart at this Max-Q level. What us mouth-gaping students didn’t know at the time was that the crew compartment remained intact and fell at a speed of about 333 km per hour as it hit the ocean. Another startling revelation was that three astronauts survived the initial blast, but most certainly met their untimely end as they hit the water.

I remember the librarian, in a state of shock, suddenly turning off the TV to prevent us students from seeing more.

So where did management go wrong? They didn’t listen.

You can imagine the immense pressure the entire program was under. This was the most diverse group of astronauts ever assembled. Not only was there a high school teacher who beat out 11,000 other applicants to become the first “everyday” citizen to go into space – she was the ‘hope for tomorrow’, a ‘symbol of optimism and progress amid Cold War tensions’ – the rest of the crew represented America the Strong including another female astronaut. Not to mention the enormous cost of the program. Of course the pressure was on!

In fact on the night before the launch, NASA conversed with the Solid Rocket Booster manufacturer, Morton Thiokol. Some of the Thiokol engineers expressed their concern about a possible O-ring failure in cold weather and recommended giving the launch a rain-cheque.

With NASA pressuring Thiokol management, approval was given for the launch. And the rest became history ingrained in our minds.

What was the true cause of the disaster? Not the failure of the O-ring. But rather a failure in not allowing a speak-up culture combined with a hard-wired management structure that chose to bypass safety requirements in order to use this mission to make themselves look good to the eyes of the world.

In organizations the world over, communication breaks down and employees are not allowed to speak-up to express concerns. The difference is these organizations are hit with penalties, reprimands, job losses, negative media coverage, but everyone emerges on the other side still alive. All these organization need to rise to the challenge of building back trust among employees, the public, and stakeholders. NASA was no different. Their biggest challenge was to win back America’s confidence in the Shuttle program. But it would seem that they didn’t learn their lesson.

On Feb. 1, 2003, Space Shuttle Columbia broke up as it returned to earth, killing seven astronauts on board. In yet another investigation, it was determined (again) that NASA knew of the issue that befell this crew. A large piece of foam fell from the shuttle’s external tank and fatally hit the spacecraft wing. This problem with foam had been known for years, and NASA again came under intense scrutiny for allowing a bad situation they knew of to continue.

Thirty years on, it’s a lesson that every organization, no matter how big or small, should take to heart. The enormity of not listening to concerns that people brought forward will be forever etched into the make-up of NASA. In hindsight would NASA have stopped each shuttle mission knowing that lives would be lost? One would hope so, but the lack of communication certainly speaks volumes to the cultural make-up of the company at the time.

Yet another reason to embrace that speak-up culture.