Why will nobody blow the whistle? 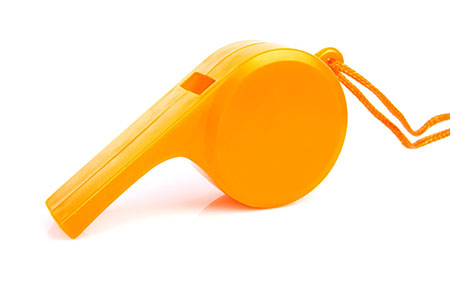 “If  you see something, say something”

Is it an empty slogan? It appears that if you do say something, retaliation soon follows. People are too afraid to blow the whistle. Which is probably why nobody spoke up about the two San Bernardino, CA shooters before they were able to go on a shooting rampage for 4 hours, killing 14 people. These two suspects left behind three rigged-together pipe bombs with a remote-control device that apparently malfunctioned, and had over 1,600 more bullets with them when they were gunned down in their SUV.
Many reports have stated that people may have had their suspicions about the pair but were too afraid to come forward for fear of being branded a racist. And this fear seems to be quite established. Back in September of this year, a 14 year old boy brought a home-made clock to school that was mistaken by his teacher, for a bomb. Based on comments that President Obama made on the Boston Marathon bombings, that being “we all have a part to play in alerting authorities. If you see something suspicious, speak up,” the teacher did just that – spoke-up about what was perceived as being a bomb.
What happened after that cancels out the “if you see something, say something” campaign. Not only have the actions of the boy’s school been cast as stereotyping him based on his Sudanese ancestry and Muslim faith, the President went so far as tweeting ‘cool clock… want to bring it to the White House?’ This was done in an attempt to quell the heightened media coverage and rumblings throughout the country. This also seems to have branded the President a liar – what happened to “if you see something, say something”? (for the record I personally think this kid was targeted unfairly and was just trying his hand at cool science stuff. But also for the record, don’t go to school with something that resembles a bomb – just saying. We wish him the best in his future)
“United States of America Inc.” has been told to say something if you see something. Yet if someone does speak up, they get branded all manner of words ending in ‘ist’ or ‘ic’. It’s no wonder people are too afraid to speak up. This philosophy is also held true in the corporate world.
Here’s another example of speaking up, then getting retaliated against. In 2007, when airline passengers reported concerns about a group of rowdy imams, the Council on American-Islamic Relations threatened to sue the unnamed “John Does” who went to authorities. Thankfully, Congress passed legislation protecting whistleblowers… sort of.
People are told to speak up if they see something. But unless you are given different scenarios on what you’re supposed to be speaking up about, how is it fair to judge someone on what they bring forward. Like an organization, America is made up of many different cultures. And each of us has our own ideas of what is ‘right’ and what is ‘wrong’.
What one person may perceive as ‘oh they were just having a bit of fun’, may be perceived by someone else as being ‘I need to report that, it’s wrong’. This is why, in the corporate world, companies spend a lot of time and money putting together policies and procedures and explain everything under the sun. Assuming these companies communicate their policies and procedures effectively, employees should have no issue determining right from wrong.
Unfortunately, there’s not really a procedure manual sitting on the shelf in the offices of United States of America Inc., disseminating information throughout the land on ‘what you’re supposed to see’ and ‘what you’re supposed to speak up about’. So each citizen makes this determination on their own, based on what they are being told during a heightened event, typically some form of ‘terror’ activity. If you see something, speak up…
Wait, don’t really because the backlash will be epic! It’s a similar feeling in many organizations. Just turn around and walk the other way. Pretend you didn’t see anything.
How do you get employees to report misconduct? How do you get citizens to report misconduct? They need to have confidence in their leaders. People are more likely to report on wrongdoing if they feel their leaders are committed to ethics and being accountable. People will also be more likely to report wrongdoing if they feel they won’t be preyed upon afterwards. That’s a little more difficult when you’re dealing with a nation. But in an organization there’s no excuse.
There seems to be much work to do to create a confident whistleblower culture.