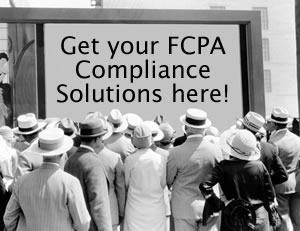 Enforcement of the Foreign Corrupt Practices Act (FCPA) has reached unprecedented levels in the last year. Dedicated enforcement units at the DOJ and SEC are devoting more resources to sector-wide investigations, resulting in larger settlements within increasingly varied industries.
Overseas anti-corruption enforcement activity has also increased dramatically. The long-awaited UK Bribery Act further expands the reach into global corruption enforcement. In addition, other countries are increasingly prosecuting corruption occurring within their borders.
In this heightened regulatory climate, companies must identify high-risk activities while concentrating compliance efforts on mitigating potential violations of law. Here are some recent trends and developments in anti-corruption enforcement;
Aggressive enforcement and record fines: Penalties imposed under the FCPA continue to increase dramatically, including large amounts of disgorged profits.
Bounties paid to whistleblowers: The Dodd-Frank Wall Street Reform and Consumer Protection Act of 2010 (Dodd-Frank Act) enacted a new set of rewards and protections for whistleblowers who provide tips to the SEC on fraud and securities violations, including under the FCPA.
New tools used by enforcement authorities: Enforcement authorities intend to continue targeting industries as a whole, using sector-wide sweeps based on information collected from one company or informant. In addition, the SEC has started to use non-prosecution agreements in its enforcement efforts.
U.K. Bribery Act and overseas enforcement: The UK Bribery Act has tangibly changed the landscape of anti-corruption enforcement. Beyond the UK, more countries are initiating enforcement actions against businesses engaged in improper behaviour within their borders.
Enforcement actions against individuals: The DOJ and SEC continue to investigate and charge individual decision makers, not just corporations, with violations of the FCPA.
The UK Government has recently announced a review of the Bribery Act and its intent to reduce the cost of compliance for small and medium-sized businesses. The main focus will apparently be on facilitation payments. These are small payments given to officials to permit or speed up a service, and that are illegal under the UK Bribery Act but narrowly permissible under the US FCPA. The current legislation has been challenged by businesses that operate in jurisdictions where such payments are a common and arguably necessary occurrence, and also by those companies that are subject to both the Bribery Act and the FCPA. At the same time, the facilitation payments exception under the FCPA itself appears to be under review and perhaps on the way out.
While many applaud the UK Government’s expressed intention to reduce red tape for small and medium-sized businesses, these proposals are in contrast to repeated promises to clamp down on bribery, as well as contrary to the Serious Fraud Office (SFO) guidance statements that facilitation payments are regarded as bribes. It will be interesting to see whether any meaningful proposals actually come out of the review.
Regarding the facilitation payment exception in the FCPA; it is presently being questioned and may well be on the way out. As an example, one U.S. Securities and Exchange Commission official argued that “while the FCPA contains several core provisions that will always withstand the test of time, the facilitation payments exception is out of date in this modern-day era of commerce and sensibility.” Indeed, he predicted that the facilitating payments exception “will eventually be eliminated” formally in response to “international pressure.” Many attorneys in the U.S. have also wondered whether U.S. prosecuting authorities have already effectively read the exception out of the statute.
Nevertheless, the recent joint guidance issued by the SEC and the DoJ recognizes that facilitation payments are still an exception under the FCPA. This disparity in treatment may turn upon the distinct differences between the Bribery Act and the FCPA on the issue of corrupt intent. Under the FCPA, the prosecutors have to prove this as an element of any crime charged, while in the UK, the Bribery Act’s corporate offence is one of strict liability. If the UK and U.S. authorities were to somehow agree on a common approach regarding this issue, it would certainly be a welcome outcome.
Until these uncertainties are all sorted out, it is surely prudent to continue with caution and consider facilitation payments as inadvisable.