How Does a Whistleblower Report Ostracism? 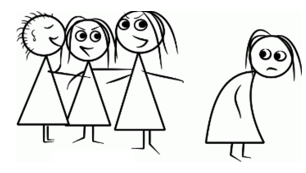 Ostracism is a silent bully. But is negative attention better than no attention?

In the past decade, research has established bullying as a prevalent problem among working Americans. A survey by the Workplace Bullying Institute at the beginning of this year found that more than a quarter of adults have suffered from some form of harassment at the office, most of it from superiors. The effects this has had on employees was severe, including anxiety, depression, and, in extreme cases, post-traumatic stress.

27% of Americans suffered abusive at work, 21% witnessed the abuse, 72% are aware that workplace bullying happens

A recent study out of the University of British Columbia’s (UBC) Sauder School of Business, in Organization Science, found that the consequences of workplace ostracism, compared to workplace bullying – that is, alienating a co-worker, rather than abusing them – has much worse affects on that employee.

A professor involved in the study, stated that “when someone is being bullied, they are at least receiving attention and have a social role to play. But if someone is ostracized in the workplace, the signal is you’re not even worthy of negative attention, you’re not worth someone’s energy to react to you.”

“We’ve been taught if you don’t have something nice to say, don’t say anything at all. But ostracism actually leads people to feel more helpless, like they’re not worthy of any attention at all.”

This study also reported that of the people who indicated being ostracized, they were more likely to quit their jobs, compared to those who received attention in the form of bullying.

The researchers say that the response is quite striking because ostracism is seen as far more socially acceptable than bullying, and they found that workers consider ignoring their colleagues more appropriate than harassing them.

“Ostracism threatens a sense of belonging and that may not sound important, but we know in psychology we have a fundamental need to belong – we’re social animals.“

Ostracism in the workplace need not be intentional to be harmful. In some cases, busy or very unsociable co-workers may have no idea they’re being cruel by neglecting one of their colleagues.

So how do you blow the whistle on ostracism?

Despite the progress organizations are having in combating workplace bullying, most current strategies and policies simply don’t have an ‘ignoring co-workers’ clause. And of course, that makes blowing the whistle on such behaviour tough on employees because essentially there is nothing to report. Where’s the paperwork or documents to prove this type of activity?

Perhaps the real estate, in organizations’ policies and ethics guidelines, where “bullying” lives should also include ostracism as part of the definition? After all, it can be an intentional act aimed at harming a co-worker – and that’s the same as “bullying”.

Having a company like WhistleBlower Security on your side where employees can report on any type of behaviour, including ostracism, goes a long way to ensuring all of your employees are experiencing the same type of job satisfaction. Our tools enable the reporting of any type of wrongdoing and your employees can feel secure that whatever they feel they need to report on, they can do so with complete confidentiality and anonymity.

Whistleblower Security is committed to promoting a culture of integrity, collaboration and transparency for all our employees and clients. With a 24/7/365 whistleblower hotline, employees can be assured that all of their ethical concerns will be heard and addressed.