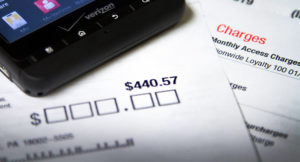 Most of us already pay a fortune on our monthly cellphone bills, but if you were a T-Mobile customer between 2009 and December 2013, you may have been cheated into paying additional charges as well.
The Federal Trade Commission (FTC) is filing a lawsuit against the U.S.-based wireless network, accusing them of charging customers with bogus fees that added up to hundreds of millions of dollars.
Yikes. As if we weren’t paying enough for our data plans already.

Is It T-Mobile’s Fault?

The aforementioned bogus charges didn’t come directly from T-Mobile though – they actually came from third-party services that offered T-Mobile customers subscriptions for celebrity gossip, flirting tips, and horoscopes via text message. While some customers did authorize these charges, many others did not – and still got charged.
These subsequent charges were then concealed on their monthly T-Mobile bills – and as a result, nearly 40% of customers that were faced with these inflated charges sought refunds.
The FTC points to these customer complaints as proof that the “charges were never authorized,” and should have been an “obvious sign to T-Mobile.” The FTC’s consumer protection director accuses T-Mobile of knowing about these seedy practices and refusing to do anything about them.

The CEO of T-Mobile, who refers to his network as the “most pro-consumer company in the industry,” is now striking back at the FTC complaining that their accusations are “sensationalized,” and “without merit.”
John Legere, the CEO, claims that they stopped billing for these texting services back in 2013, and even started a program that allowed customers to get full refunds. He says that the FTC is choosing the wrong people to pick a fight with – and that they should be charging the third-party services instead.
The FTC failed to reach an agreement with T-Mobile over these charges and as a result, they will be taking these matters to court.
Whether or not you believe that T-Mobile really has your best interests in mind, it’s more important that your workplace does as well. Fraud is usually an inside job and by implementing an ethics reporting system and establishing a healthy whistleblower culture within your workplace, you’re putting the interests of your employees first and preventing any potential wrongdoing.
WhistleBlower Security prides itself as Canada’s independent certified ethics reporting provider for businesses, and is committed to promoting a culture of integrity, collaboration and transparency for all our employees and clients. This includes working with our clients to establish a strong Code of Ethics. With a 24/7/365 whistleblower hotline, employees can be assured that all of their ethical concerns will be heard and addressed.