US Govt. Spent $100B in Improper Payments – Governmental Mismanagement? 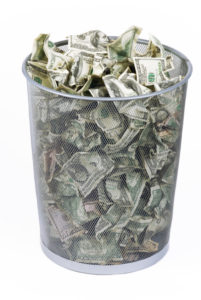 Yet Another Reason to Dread Tax Season

If you’re an American taxpayer, I have some bad news for you.
According to recent reports by federal agencies, $100 billion in payments were made last year to people who may not have been supposed to receive them.
This means that last year, some of your tax money may have paid for healthcare for dead people. Unemployment benefits for people who are actually working. Tax credits for families that don’t actually qualify.
This isn’t a first, either. This type of over-payment may have occurred each year for the past five years – meaning nearly half a trillion dollars of misspent money that came out of taxpayers’ pockets since 2008.
However, the Obama administration is aware of this problem and has been cracking down on improper payments since they hit a high of $121 billion. In fact, federal agencies managed to recover more than $22 billion from their over-payments last year, and the White House budget office is still striving to attack waste, fraud, and abuse as aggressively as ever.

What Types of Fraud and Abuse Are They Dealing With?

Most of the improper payments originate from government health care programs – especially Medicare’s health insurance programs for older citizens, which totalled $50 billion in improper payments last year.
So is this all the result of fraud and abuse? Not necessarily.
Most of the improper payments were actually labelled as improper because they were issued without proper documentation. For example, in some cases, the paperwork did not confirm that the medical services were actually necessary. Thus, most of these types of ‘improper’ payments were actually the product of documentation and coding errors made by the service provider, and not payments made out to people who did not deserve them.
However, the same cannot be said of improper payments from other sectors. As previously noted, there were cases where Medicare payments were still being given out to the deceased. While some of these cases were genuine mistakes, there are certain companies and doctors that knowingly file claims on behalf of deceased patients, knowing that the system is too complex and vast for them to be caught.
Similar cases of fraud and abuse occur with the earned income tax credit – tax credits that are given to families with low income. It can often be difficult to enforce proper eligibility when families apply for this tax credit, which often results in people getting credits they don’t deserve by claiming additional children that don’t exist or misreporting their income.
This is also occurring with unemployment insurance, that provides temporary benefits to unemployed workers. According to the Labor Department, most of their mistaken over-payments went to people who didn’t report returning to work, didn’t meet state requirements to look for a job, voluntarily quit their jobs, or were actually fired from their jobs. This is clear governmental mismanagement.

Protect Yourself and Your Company From Fraud

Protect your workplace from such flagrant misuse of resources by establishing a whistleblower culture today. Having a certified ethics reporting system, and a company like WhistleBlower Security on your side where employees can report on any type of behaviour goes a long way to ensuring all of your employees are experiencing the same type of job satisfaction. Our tools enable the reporting of any type of wrongdoing and your employees can feel secure that whatever they feel they need to report on, they can do so with complete confidentiality and anonymity.
Whistleblower Security is committed to promoting a culture of integrity, collaboration and transparency for all our employees and clients. With a 24/7/365 whistleblower hotline, employees can be assured that all of their ethical concerns will be heard and addressed.