A Whistleblower's Battle Over Beer

(Got Your Attention?) Yep, You Read That Right… Beer

One often thinks of bribery and corruption happening in major, high profile organizations (Enron, WorldCom, Tyco). Those are certainly the first I think of anyway. But, of course, bribery can happen in any company, any size, and any industry.
Essentially, bribery is an act of giving money or gifts that alters the behaviour of the recipient.
In the business of beer? Well you bet.
There’s approximately 3000 breweries in the US producing many thousands of beers. A person walks into a bar… no this isn’t the start of bar joke… and asks what beer is served. The server spews out a bunch of names, and a choice is made. Ever wonder how a bar determines what beers they should offer? With so many breweries out there, how is that choice made? Well in some cases, with bribes.
Some bars will go with the run of the mill name brand hops that regulars can come in and enjoy in vast quantities. Other bars go for the specialty craft beers more picky pallets prefer. Yet others will sink to accepting the bribes of distributors to serve only their beers on offer – it’s a business practice called pay-to-play. 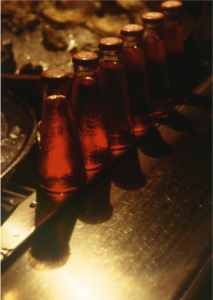 Pay-to-play is when breweries bribe bars under the table to stock their beers and freeze out competition.
Brand-name distributors will offer cash, new tap systems, free beer and other incentives to tavern owners in exchange for exclusivity for taps, or shelf space, for mainstream brands, preventing independent brewers any fighting chance of competing. They quite simply don’t have the money to keep up with the bribes. They also know, it’s illegal. Federal and state laws forbid producers and distributors from offering money, loans or anything else of value to retailers to freeze out the competition. It’s also unlawful for bars to accept these gifts.
Well one man has decided to blow the whistle on this Capone’ish activity. Dann Paquette, co-founder and brewer for Pretty Things Beer & Ale Project of MA, turned to Twitter to tweet out, under the brewery’s handle, that Boston is a pay-to-play town and he’s often shut out of the pubs, along with other independents.
It’s not just MA where this practice is – a’hem – brewing. A Crain’s investigation in 2010 found that a popular Chicago hotel bar was taking payouts and other bribes from a powerful MillerCoors distributor.
Bribery and corruption is second on the ACFEs 2014 Report to the Nations list of frequent fraud schemes. It accounts for about 30% of all fraud that is uncovered. And included is bribes to influence decision-making.
Whistleblowing is an important source of intelligence to help organizations identify wrongdoing and risks to the public. The fact that many concerns go unreported shows that it’s essential for employees to have trust in a system for handling whistleblower complaints. It’s equally important that they have the confidence that they will be taken seriously, protected and supported by their organizations if they blow the whistle.
That’s all fine and dandy if you’re Enron or Tyco. In organizations like that, if a whistleblower comes forward, chances are those concerns will be heard and acted on. But in this smaller scenario, beer industry business of bribing, most US states don’t seem to want to waste their time or effort cracking down on this. They’d rather stick to the mega corporations.
That doesn’t mean to say that Dann the whistleblower’s efforts are in vain. Also according to the ACFEs 2014 Report to the Nations, 40% of frauds were uncovered by whistleblower tips. All it takes is one voiced concern to start that important conversation.
Bribes are all around us. It doesn’t matter the size of the organization, or the industry. If someone is paying someone else in order to reap some sort of benefit, that’s a bribe. How do you know it’s not happening in your organization right now? Here’s another fun stat. It’s your employees who are generally the first to know of any wrongdoing happening in your organization. If that’s the case, then they need a place where they can report those wrongdoings anonymously. An ethics reporting system is your first line of defense against bribery, fraud and corruption.